I beg to differ and today’s article gives you proof that the Saints logo IS different today than it was when the team first suited up in 1967 and struggled until 1987. Fun fact: The team never won a playoff game in their initial helmet logo, one that existed from 1967 to 1999 before tweaking it in 2000.

The dark days in Saints’ history lasted until 2005, culminating with the team becoming nomadic in the wake of Hurricane Katrina. But upon upsetting the Cleveland Browns to open the 2006 season and franchise icon Steve Gleason’s unforgettable punt block known in NFL Lore as ‘Rebirth,’ the current Saints logo has seen the franchise perform at an all-time high, winning a Super Bowl and several division championships between 2006 and 2020.

Now, let’s take a look at the logo history.

When the Saints debuted in 1967, they unveiled the fleur-de-lis, which has been their primary and helmet logo throughout. However, from 1967-1999, this version of the fleur-de-lis was thinner, and lacked the double-outline we see today – instead going with the single outline (in white).

In 2000, the primary logo was given a slight makeover – it had changed to gold and was given a double (black and white) outline. This logo differed from the team’s actual helmet logo, which remained black but it too had acquired the double-outline as well.

The Saints’ first alternate logo consisted of a gold shield containing a black fleur-de-lis and a black upper portion with the team’s wordmark while a second alternate showed a cartoon image of a Saints’ player posing with the logo. Both of these logos lasted from 1967 to 1984.

The first gold fleur-de-lis logo appeared as an alternate in 1976 and lasted until 1984. As mentioned above, this logo would become the team’s primary in 2000 – but an updated version with a lighter shade of gold.

A gold logo in the shape of Louisiana appeared in 1985 and lasted until 1999 – this logo contained a white fleur-de-lis along with a white star showing the location of New Orleans.

In 2009, the team revived the original alternate logo depicting the cartoon Saints player posing with the logo.

The Saints have also had anniversary logos celebrating their 25th, 30th, and 50th seasons. 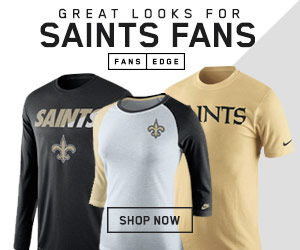 I’ve always been a fan of the Saints’ logo due to its longevity with simple upgrades to the look, which I can live with. I’ve always been a fan of the team’s State of Louisiana logo and like the fact that it continues to exist to this day, though I’d love to see it return to either the sleeves or as a chest patch. While I prefer their older shade of gold, the logos look decent regardless. One of the better overall looks.

Click Here to catch all the latest uniform-related happenings of 2020.

Get New Posts By Email!

The Helmet and Jersey Stop does not own any of the team, league, or event helmets/jerseys/logos depicted within this site, we do not have the power to grant usage rights to anyone. All team and league information, helmet and jersey logos, and names contained within this site are properties of their respective leagues and ownership groups/organizations. This site is maintained as an online helmet and jersey encyclopedia for research and historical purposes.

Please note that I will receive a small affiliate commission for purchases made through any links on this site.